A few days ago the first products with the name BYGGLEK from the cooperation between LEGO and IKEA appeared at the IKEA in Mannheim, Germany. As we now know, these were sold a “little” to early. But since the products were on the shelf for several hours, we have all products available thanks to Rob from the BrickTwinTowers and can show you the BYGGLEK boxes in our review.

It is not yet clear when the boxes will appear officially. It seems, however, that the worldwide market launch for the products of the BYGGLEK series is not planned until autumn. By the way, this series will include even more products than the four currently known.

Please keep in mind: This article was written in German and later translated to English! If you find mistakes, feel free to let us know in the comments!

General information about the boxes

In total, the BYGGLEK range currently consists of four different products. Three of them are different boxes with LEGO studs on top. We have listed all articles for you here:

The fourth product is the LEGO x IKEA BYGGLEK 40357 set with 201 LEGO bricks. It has the IKEA number 204.368.88. But we will show you this another time. This review is about the three (or actually four) different sized boxes. 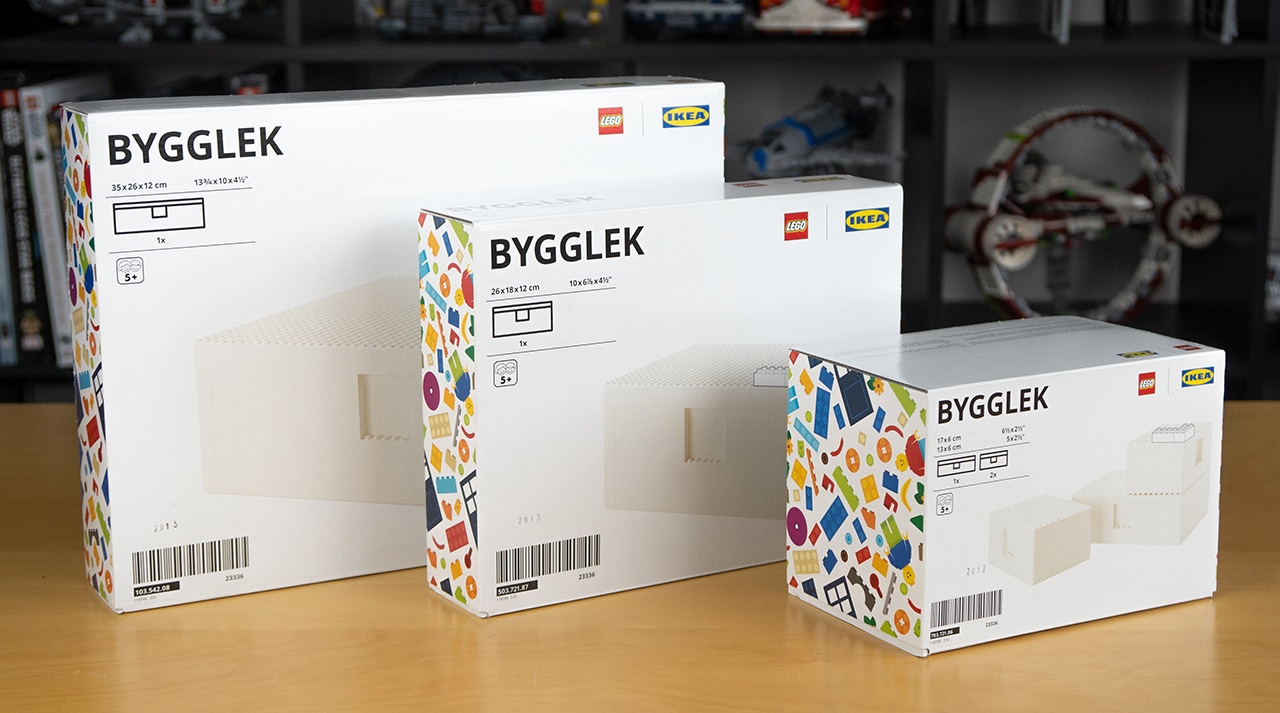 All BYGGLEK boxes are wrapped in a cardboard box with printed LEGO bricks on the side. Both the LEGO and IKEA logos are printed on the boxes. We used a knife to help us unpack the boxes, because they are glued together and therefore difficult to open without destroying them. At least I did not make it without damaging the box. Maybe I should have kept my hands off the knife… 😉 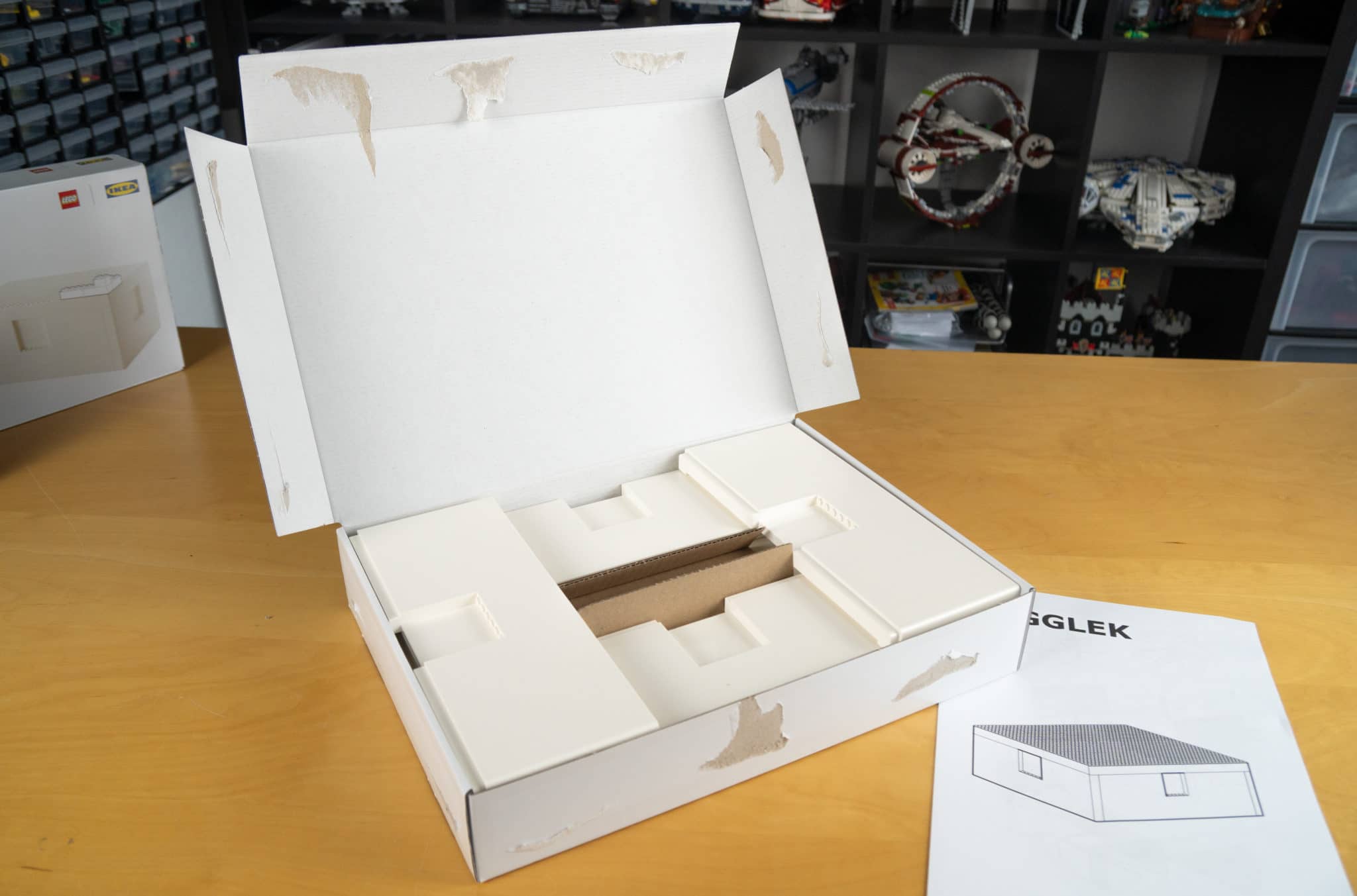 The big and the middle BYGGLEK box are packed in their individual parts and have to be assembled “from scratch” (as it is common for both IKEA and LEGO 😉). Each box consists of a bottom, four side walls and a lid. The side parts are pushed into each other and the bottom is then clipped in. The lid is then placed loosely on top. The two big boxes are then exactly 12 bricks high and therefore fit perfectly into the “LEGO System”. 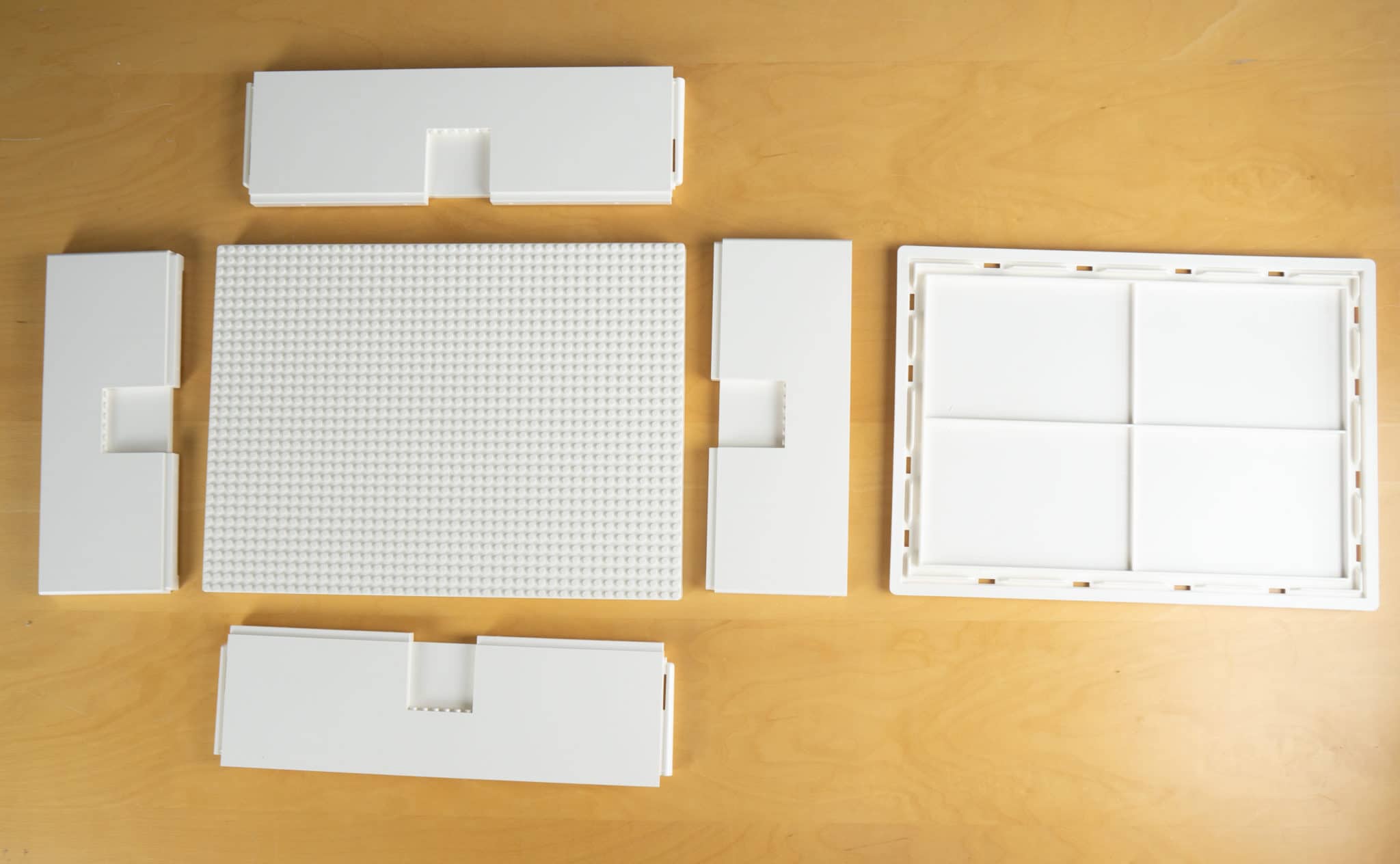 I have made a small video of the construction of one of the boxes:

After clipping in, the bottom is very tight and can only be loosened again with some effort. It is important to note that the boxes cannot be attached to each other by means of the usual clutch ppower. The boxes can therefore be easily lifted off the lid surface of another box and have easy play in all directions when standing on it.

Here are a few more pictures of the boxes:

The packaging of the smallest BYGGLEK box set, which consists of three boxes (two small ones, one double in size), is much thicker. These boxes do not consist of four combinable border elements, but have a continuous border and are already pre-assembled. These smaller boxes are half as high as the large boxes, i.e. exactly 6 bricks high. By the way: None of the boxes are sealed, because when you clip in the floors, small gaps remain. So the boxes can’t hold any liquids. 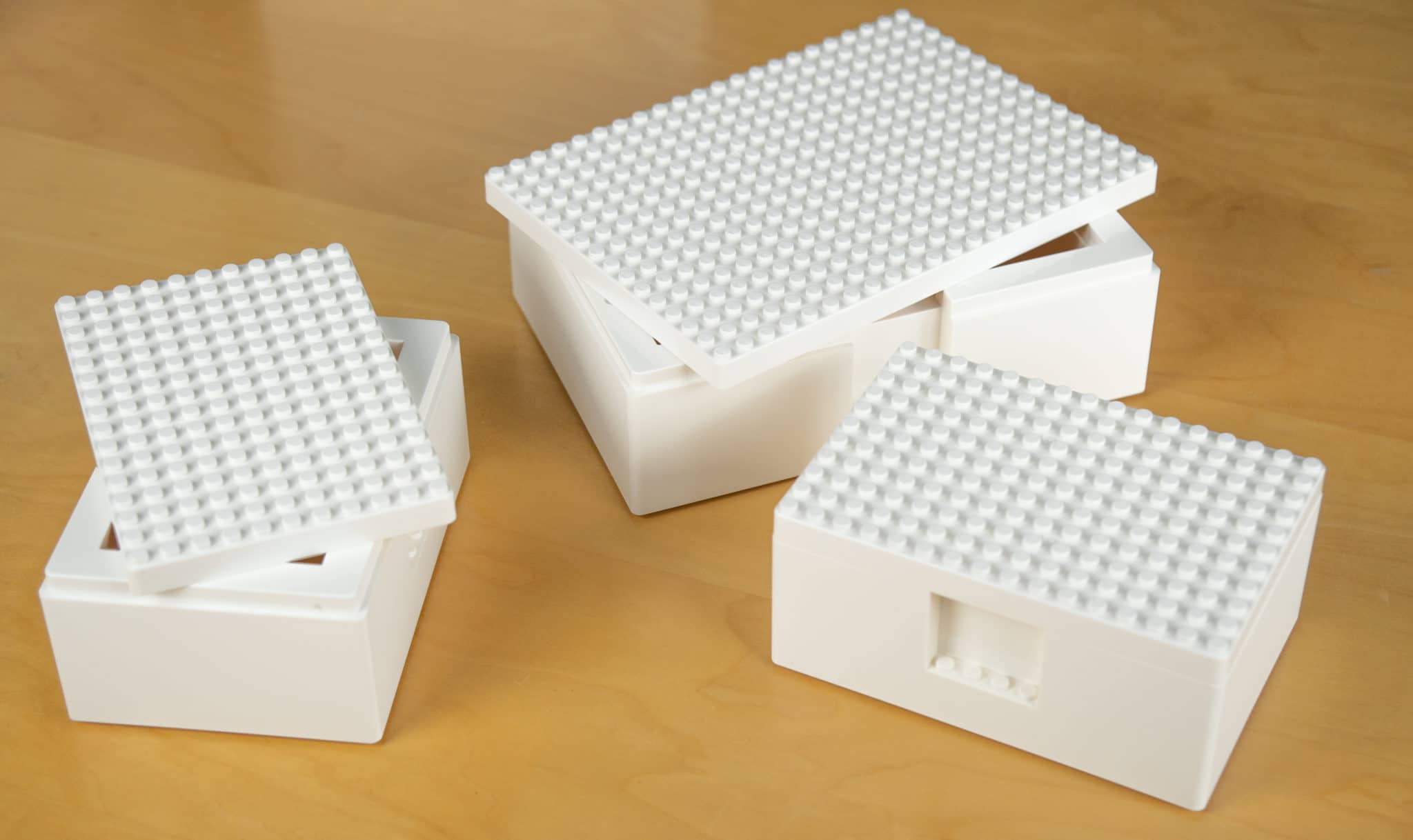 The boxes in detail

In the following we want to take a more detailed look at the boxes.

Let’s look at the material first. And how could it be otherwise, all boxes are made of white ABS plastic. So the same material LEGO bricks are made of. 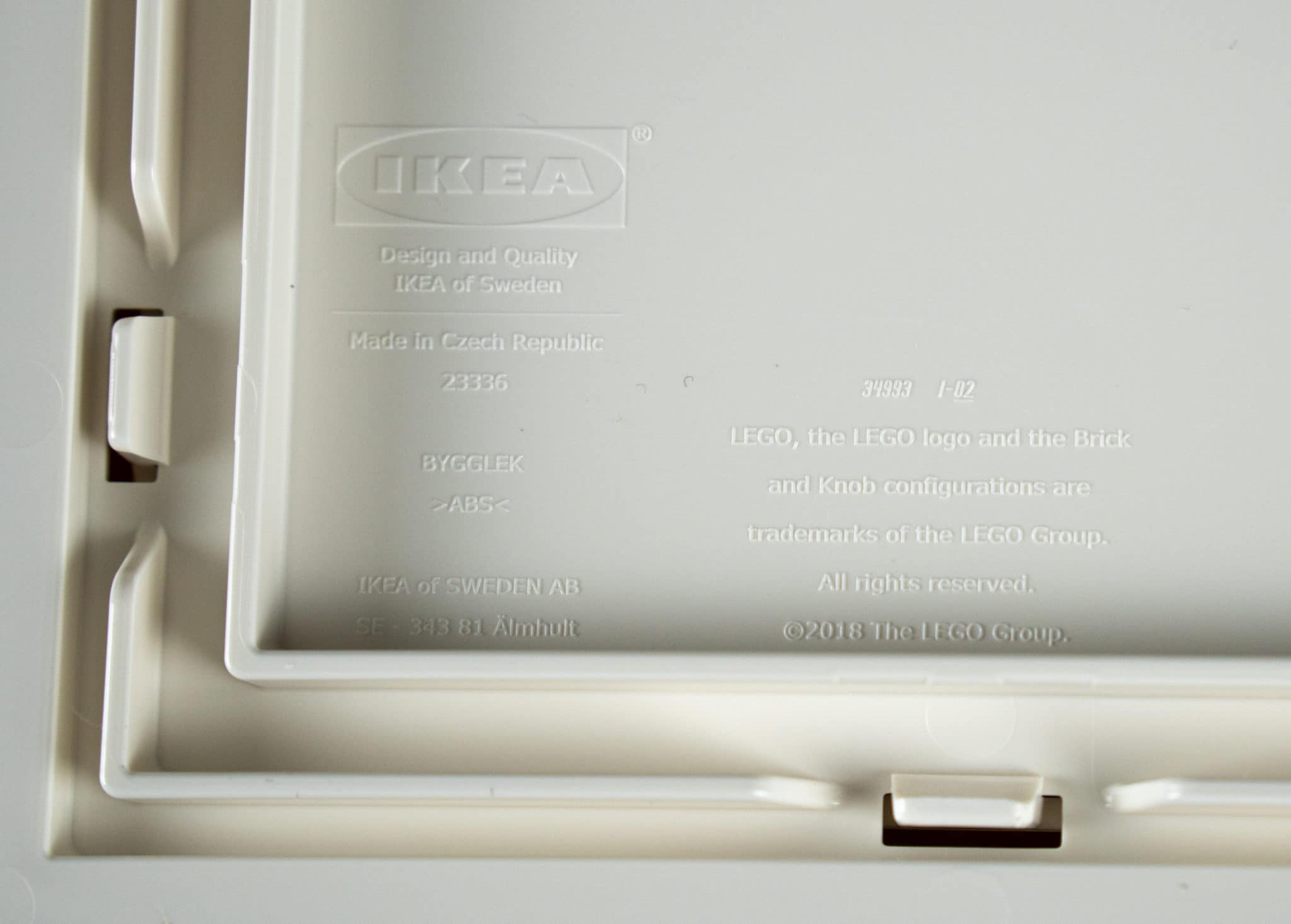 Weight and volume of the boxes

To get an impression of the amount of ABS used for the boxes, we put all three items on the scale once (without packaging):

For comparison, I’ll use a small LEGO Star Wars UCS set: The LEGO 75181 UCS Y-Wing Fighter weighs about 1,400 g. So you get a really big amount of (single-colored) ABS with LEGO logo on the knobs for small money. It’s not completely wrong to say that if the boxes were not sold by IKEA, but exclusively manufactured and distributed by LEGO, the price would probably be much (!) higher.

We have also measured the approximate capacity of the boxes for you:

The lids of the boxes consist of different sized baseplates, either 1 (small boxes) or 2 bricks (medium and large boxes) high, each with rounded edges. In fact, the view to the bottom is especially interesting, because there the lids remind of the old 10 x 20 baseplates (700eX) that LEGO produced until 1969.

However, the clutch power is different: While the old baseplates don’t stick that good (anymore), but at least have a certain cutch power, the BYGGLEK cover is absolutely loose and always has a certain play.

On the upper side, the cross-shaped ribbing on the underside of both the old LEGO plates and the BYGGLEK lids creates quite unattractive “sink marks” due to the accumulation of plastic during the injection moulding process. However, these are only visible when the plates are held against the light and are difficult to photograph. The studs on the top of the lid correspond to the normal LEGO studs with the usual clutch power. Here we couldn’t see any difference to other LEGO studs. They are therefore perfect as a base for various LEGO buildings or – provided you have the necessary patience – can be decorated very well. The LEGO Art Mosaics send their regards. 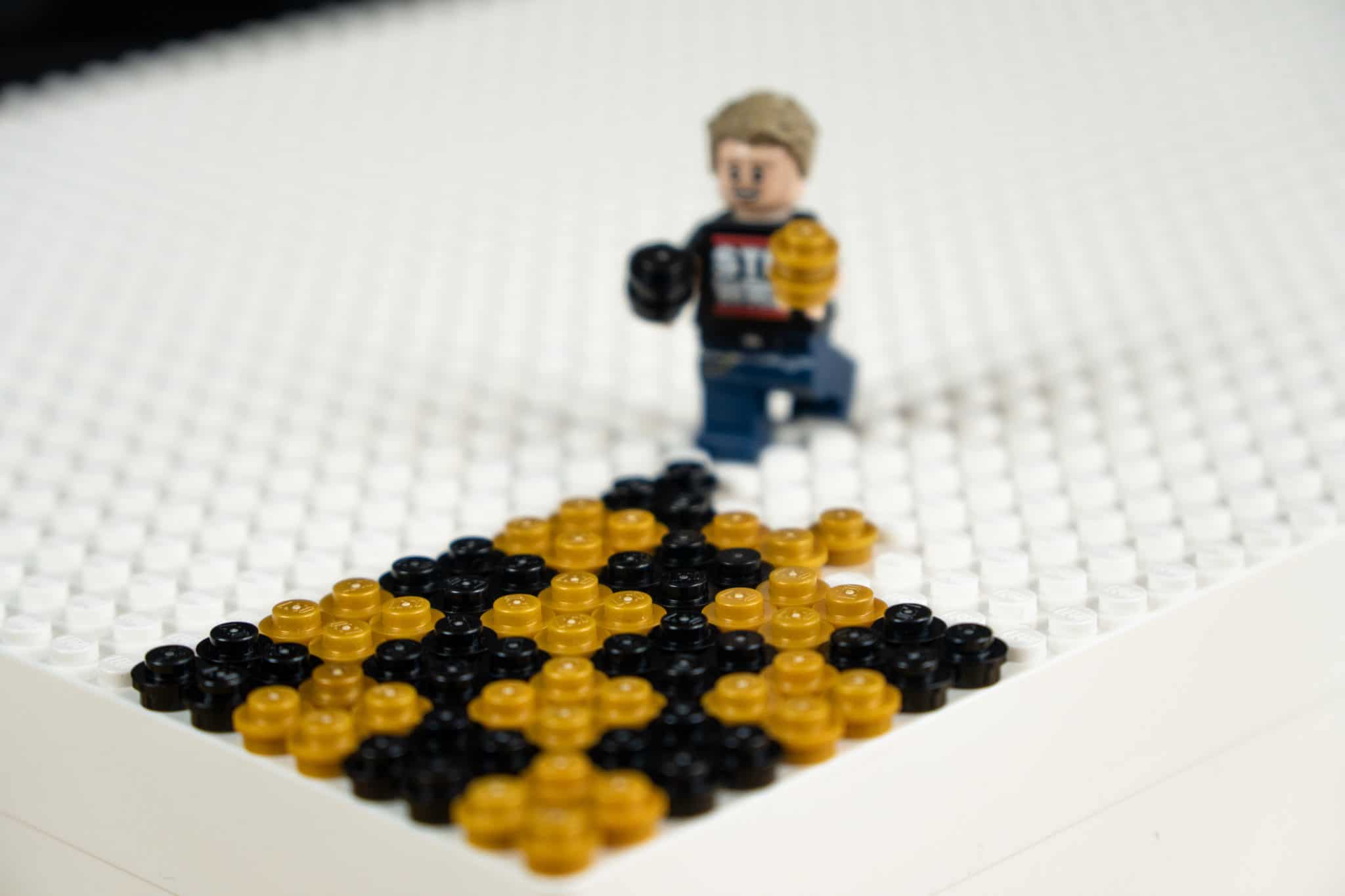 The BYGGLEK boxes can be stacked without any problems, but they do not have any clutch power on each other and are standing on each other with a certain play. In addition, there is always a small, somewhat unsightly and irritating gap when the boxes are stacked. 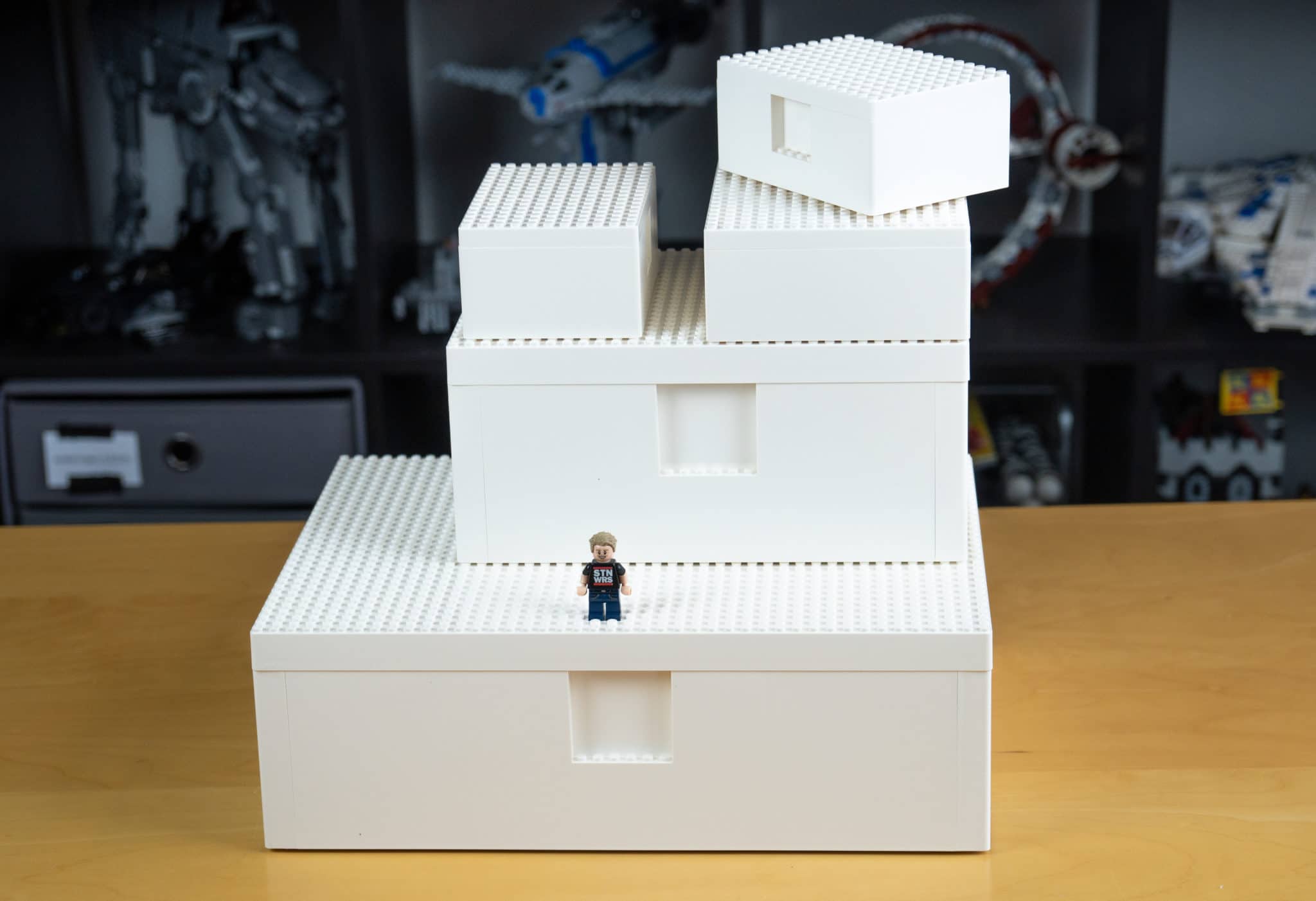 Let’s briefly come back to the manufacturer of the boxes: Whether they are manufactured by IKEA under license from LEGO, or whether LEGO manufactures the boxes and distributes them through IKEA, is not quite clear. In any case, the boxes are manufactured in the Czech Republic, where LEGO also operates a factory. However, there is no recognizable seal with a code that provides information about the production process, as LEGO always uses on its own products, on the three boxes. Only on the LEGO x IKEA BYGGLEK 40357 set with the 201 LEGO bricks there is a seal on the box (in my case labeled 09O0), which proves that the LEGO is manufactured in Billund.

After the official introduction of the BYGLLEK product line we will try to get more official information for you here.

How about a refrigerator?

Together with Jonas Kramm (in a not quite equal division of labour 😉) we have used Jonas’ LEGO collection to turn the smallest of the BYGGLEK boxes into something new. The shape and color of the box were already so clear that it became clear quite fast what it should become: A refrigerator. And this is what came out of it:

Maybe this is a little inspiration what you can do with the IKEA boxes. But of course the refrigerator gives little indication of how useful the BYGGLEK boxes can be used in everyday life. Think of it as a nice gimmick – building it was fun anyway!

The IKEA BYGGLEK boxes leave me a little bit clueless at the moment. They seem exactly like what they are: A balancing act between a box and kind of a “foundation” for building LEGO. Neither of them really fulfils either of these requirements. As a pure box for storing LEGO the boxes are too small, too impractical and actually too expensive. Here the transparent SAMLA boxes from IKEA do a much better job and are cheaper.

In order to be really useful for playing and building, I lack the clamping force of the boxes on each other. For example, a child’s imagination could be used to build multi-storey houses, which without the clamping force always seems a bit unstable. I also find the fact that only the lids and the small “niches” on the outside of the boxes can be built on, a little disappointing. A few knobs inside the boxes would have already increased the playability considerably. Here you have to get active yourself and lay out the boxes with plates.

But I want to be honest: I’m not a child anymore and in some places I certainly lack the imagination that goes along with it. And since I’m not a particularly talented builder either, I may also be missing a little bit of the sense for the creative use of the boxes in the everyday life of adult LEGO fans.

What do you think about the LEGO x IKEA BYGGLEK boxes? Is this a product that interests you? And are you curious about the other products that are supposed to be released? Feel free to exchange your thoughts in the comments!

StoneWars.de is free of charge and free of sponsored posts and excessive and off-topic banner advertising. In order to finance this blog, we are dependent on income from so-called affiliate links. So if you are about to order something from LEGO, we would be happy if you do so via one of the following links:

If you buy in a shop through one of these links, we will get a small commission without it costing you more. With this you support the work of StoneWars and help us to stay free of other advertising. Thank you!