After the first information was leaked a few days ago, LEGO has just officially introduced the LEGO 10273 Haunted House from the Fairground Collection and listed it in the LEGO Online Shop! Here again we have all pictures and information about the set for you.

General information about the Haunted House

The LEGO 10273 Haunted House consists of 3231 parts and thus secures a place in our list of the largest LEGO sets. For the time being, the set will be exclusively available at LEGO and will cost 229.99 euros,which gives a part price of 7.1 cents per stone. The set includes 10 minifigures, including two ghosts and a skeleton, as well as a wheelchair user.

The LEGO 10273 Haunted House is released in the Fairground Collection, which should be the new (and now official) name for the fair sets already stored by fans under this name. A “Creator Expert” lettering is not visible on the box. For this purpose, the set is now also provided with the new 18+ lettering and is therefore especially aimed at adult fans.

Let’s get to the official pictures of the ghost house. In the following we have included all currently available pictures of the house and the enclosed minifigures. We will add more images later in the day as they become available.

More pictures of the back of the box and the house can be viewed here:

Press release for the set

Those who love ghosts and other nocturnal horror creatures will enjoy the LEGO Ghost House at the Fair (10273). This fascinating construction project gives you a welcome change, offers a lot of thrills and lets you discover countless surprises.

Scary details tell a vivid horror story
Let yourself be quiet ly spent building. When the impressive model is ready, discover the many details hidden inside the ghost house. The house can be opened to make it easier to explore the interiors and to discover a functional freefall tower including automatic doors at the top of the tower. Watch the haunting front doors close and create a real scary effect. All that is missing are the SEPARATELY available LEGO Powered Up components, and the elevator can be controlled with the Powered Up app.

A construction project that offers a lot of thrills
This ghost house is part of a special collection of LEGO model kits for adults who appreciate refined design. The model is also a scary-beautiful birthday or Christmas present.

“Fairground Collection” instead of “Creator Expert”

What is exciting here is the question whether the Creator Expert lettering will also be omitted elsewhere in the future? Will we soon get sets with the lettering “Vehicle Collection”, “Modular Buildings” or “Landmark Collection” instead of the previous “Creator Expert” sets? We will probably have to wait and see if LEGO will comment on this or whether the next packaging will provide us with further information here.

To give the Haunted House a game function worthy of an amusement park, a freefall tower is integrated in the set. As in most sets of the Fairground Collection, this can either be operated manually or optionally motorized. For this purpose (in addition to the set itself) the following components are necessary:

If you don’t already own the components, you have to take another 83.97 euros in your hand to automate the Haunted House.

The Freefall Tower then works (at least according to the pictures) as follows:

The circumferential chain contains a wider element. This probably hooks into the cabin and transports it upwards. There, the cabin clinks, falls freely downwards and is gently braked by means of the four rubberized wheels on the right and left, so that it does not pop on the ground. As soon as the slower chain has caught up with the cabin, it starts all over again. The large black wheels on the back are probably used as flywheels when braking, so that the movement becomes nicely gentle and the “elevator” does not pop on the ground. 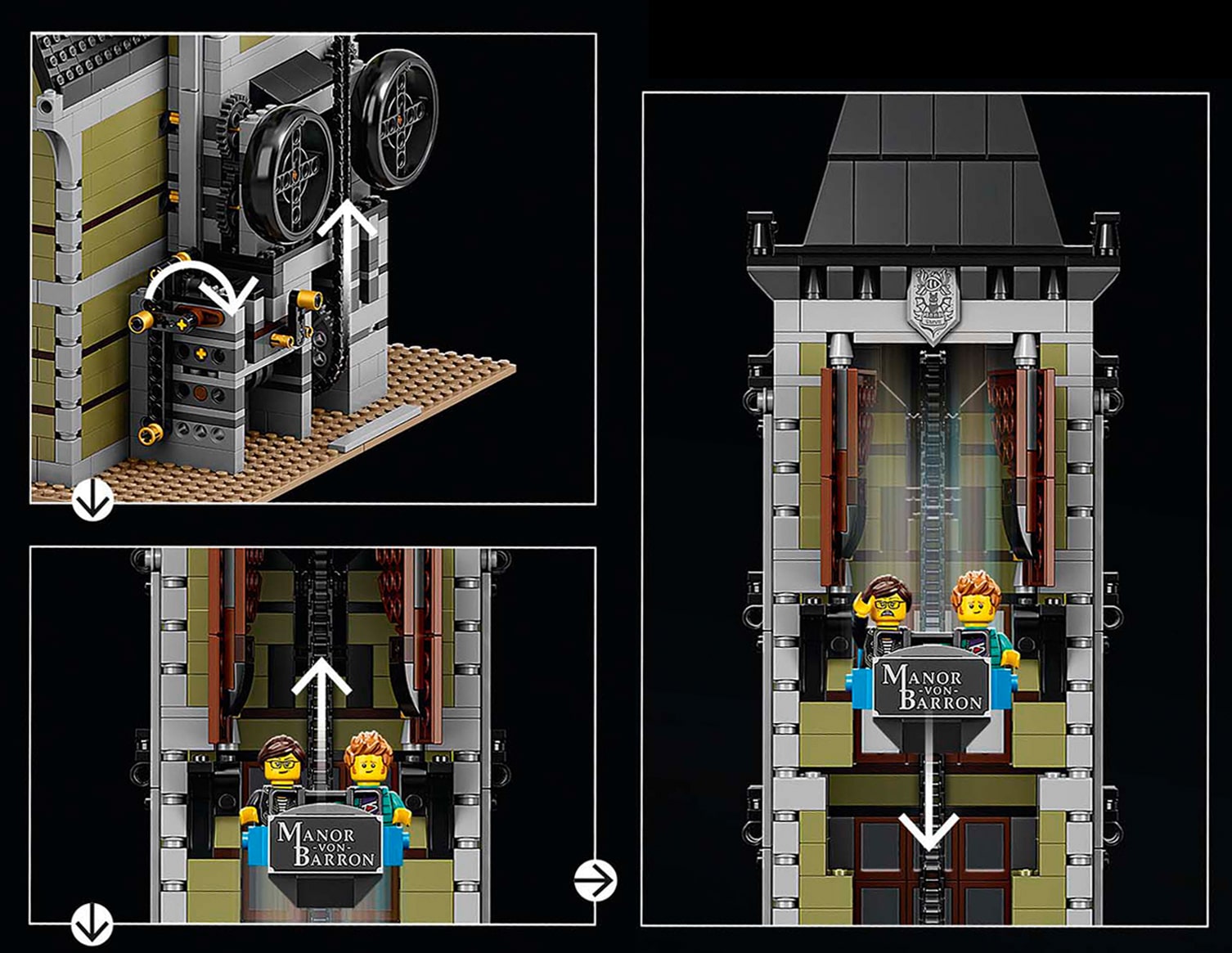 The first reviews will show us how the function looks in action.

Poll: What do you think about the Haunted House?

Conclusion of the LEGO 10273 Haunted House

The LEGO 10273 Haunted House is once again a retrospective of themed worlds that worked well in the 1990s and that many adult fans want back. Like the LEGO Ideas 21322 Pirate Bay, the Haunted House (at least to some extent) tells a story that began in the 1990s in the LEGO Adventurers series. With this, the set should appeal to the nostalgic feelings of many adult fans and certainly trigger enthusiasm storms for many.

LEGO is also taking a step in a new direction when it comes to packaging design and age recommendation, establishing itself as a toy for adults with a product that, until recently, would surely have carried an age recommendation of 14+ or 16+.

Personally, I like the house very much and manages the balancing act between a “real” ghost house and an attraction in an amusement park quite well. In addition to the theme park collectors and Adventurers enthusiasts, the house should also be suitable for fans of creepy houses who might want to integrate the house into their city layout on a mountain. It would be fitting. We can see how well the house is received by customers at the sales launch on May 20th in the LEGO Online Shop and in the Brand Stores.

In the following days we will publish another article about the house, in which we will discuss the Easter Eggs and special features of the set. Unfortunately, this was no longer suitable for time today due to our podcast recording…

What do you think of the LEGO 10273 Haunted House? Do you like the “Manor of Barron” or are you completely uninterested here? What details in the house do you like best and what do you not like? You may discuss it in detail in the comments!