Headwind for one of the upcoming LEGO Technic models: Today the German DFG-VK association started a protest action against the soon to be released LEGO Technic 42113 Bell-Boeing V-22 Osprey. The reason: The licensed cooperation with the arms companies Boeing and Bell. And LEGO has confirmed to us that it intends to review the market launch of the set.

On the website Love Bricks – Hate War the DFG-VK (Deutsche Friedensgesellschaft – Vereinigte KriegsdienstgegnerInnen e.V.) provides some material and explains from his point of view the problems with the new model: Although LEGO has always published (mostly fictitious or older) models around the topic of war (which doesn’t seem to bother the association that much), now for the first time a licensed model of an airplane or vehicle used purely for military purposes in current wars is brought to the market. This also means: license costs in unknown amounts are (presumably) flowing to the two companies Boeing and Bell. 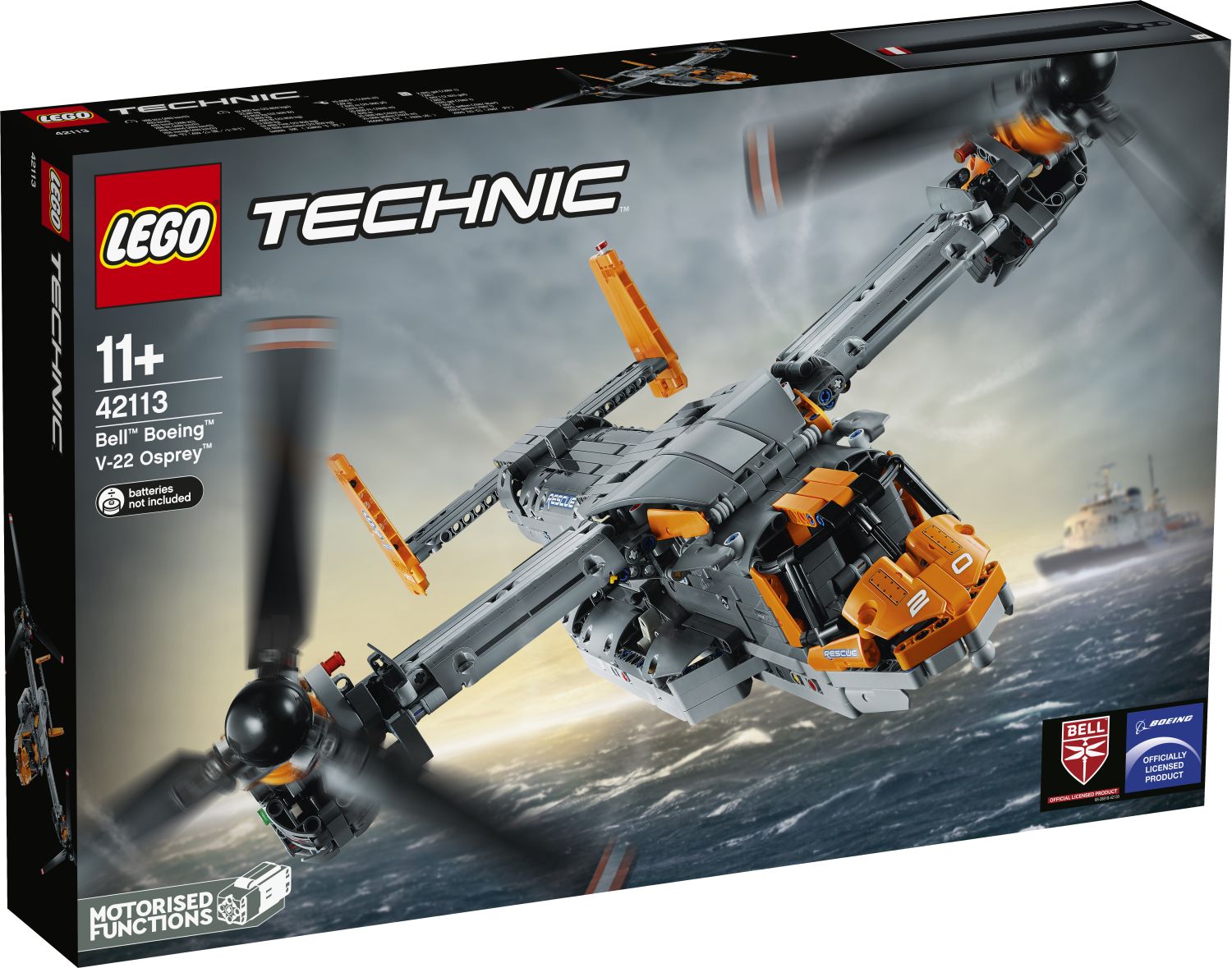 With every purchase, LEGO fans indirectly supported these two arms companies, according to the DFG-VK. And this is in violation of a regulation published by LEGO itself for its own company, which is taken from the 2010 Progress Report (p. 26):

The basic aim is to avoid realistic weapons and military equipment that children may recognize from hot spots around the world and to refrain from showing violent or frightening situations when communicating about LEGO products. At the same time, the purpose is for the LEGO brand not to be associated with issues that glorify conflicts and unethical or harmful behavior

To set an example against this and to call on the LEGO group to rethink, the DFG-VK has started a petition on change.org and is calling for protests in front of German LEGO stores on three dates in major German cities:

It would not be the first time that n association has demanded a change from LEGO: In 2014, Greenpeace was able to persuade LEGO to terminate its own cooperation with Shell, as this too violates its self-imposed goodwill.

Over the weekend, I read through the entire argumentation of the DFG-VK and I have to say that I find it comprehensibly written. According to this, it’s not about LEGO in general not putting toys on the market with any kind of reference to war anymore, but about sticking to its (self-imposed) rules not to sell modern war equipment as toys. In any case, buying these sets should not support arms companies in the form of licensing costs. And the fact that Osprey combines both things (actual, real war equipment plus license costs) is to my knowledge a novelty in LEGO and the most obvious violation of its own guidelines so far.

Upon request, the press department of LEGO Germany has sent us the following statement, which we translated to english:

The LEGO Technic Set Bell Boeing V-22 Osprey was developed by us in relation to the aircraft’s use in rescue operations. However, the aircraft is mainly used for military purposes. For a long time we have been following the principle of not designing sets with military vehicles. In this case, we have not strictly adhered to our own guidelines and high standards and will therefore review our plans to launch the product on 1 August.

The statement from LEGO at least shows that they take the accusations seriously and want to check the market launch. How the “review” will ultimately turn out will probably become apparent in the coming days.

It is not the first time in LEGO history that these self-imposed rules around weapons and warfare equipment have been discussed and it will certainly not be the last. The line between “acceptable” and “unacceptable” is often blurred when it comes to LEGO products or for example LEGO Ideas designs. It remains to be seen how LEGO will ultimately deal with this headwind and how customers will react to it.

We will of course keep an eye on the petition and the protest action for you. Should the DFV-VK really be successful with the campaign, this will certainly make some LEGO Technic fans angry, because the first impressions and reviews we have received so far at the Osprey are quite positive.

How do you see the controversy surrounding the Bell Boeing Osprey V22? Can you understand the view of the DFG-VK, or do you find this incomprehensible? You are welcome to discuss (peacefully 😉) in the comments about “Love Bricks – Hate War” and the Osprey.