Already when the first leaks and rumours about the LEGO 75936 Jurassic Park T. Rex Rampage Set went around, there was a lot of discussion: Is the set just a copied version of the LEGO Ideas design by senteosan from 2015?

We took a close look at the situation, have an official statement from LEGO and also an interview with Sami Mustonen aka senteosan for you!

When LEGO introduced the new Jurassic Park T. Rex Rampage Set (75936) yesterday, the outcry was big: The set looks very similar to the LEGO Ideas design by Sami Mustonen aka senteosan from 2014. The design reached 10,000 supporters after a relatively short time, but was rejected by the LEGO Ideas team in May 2015. 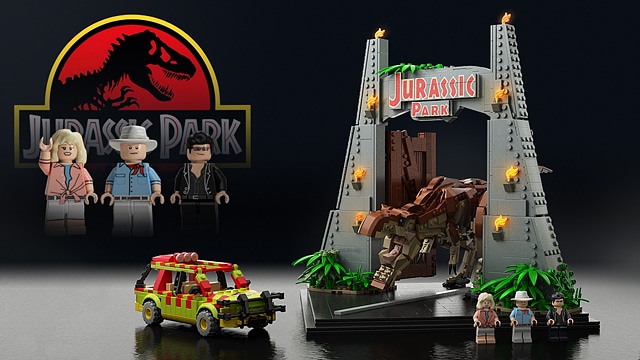 You can watch an animated video of the design here or on the Youtube channel of Sami:

The parallels in the idea can probably not be dismissed here. However, there are three differences that should not be ignored:

The parallels to the Ghostbusters House

Many readers (and also we) feel reminded by the situation of the incidents at the release of the LEGO Ghostbusters house. The official LEGO Ghostbusters fire brigade headquarters (75827) appeared in early 2016 about 1 year after a LEGO Ideas draft with 10,000 LEGO supporters was rejected.

At that time the similarities were quite big: the construction of the house resembled the LEGO Ideas design of Sergio512 in many details. Also the folding mechanism to get to the inside of the “dolls house” looked similar and also parts of the interior decoration and the arrangement of the fictitious rooms were comparable. Fan designer Sergio wasn’t quite happy about the situation, as you can read in this old Brick Fanatics report. Sergio’s statement is unfortunately no longer available on the Swiss Ghostbusters website, but can still be read here on archive.org. In it he takes offence at the bad communication of the LEGO group.

This time the visual similarities between the Ideas design and the official set are definitely not so extreme: A different scale was chosen for the set, some additions were made and also the jeep is not included. But has LEGO’s communication changed?

This time LEGO responded relatively quickly to the “accusations” and wrote an official statement that we would like to provide you with:

Based on these discussions I’ve engaged the LEGO Ideas team and the Jurassic Park Design team. Here’s the statement about the set:

Although the new 75936 Jurassic Park T-Rex Rampage set shares similarities in design to the LEGO Ideas submission „Jurassic Park“ by senteosan, this model was developed entirely internally by a team of LEGO Designers who create great new sets that kids and adult fans alike are passionate about. The basis of their model was a large, grey, brick-built T-Rex created by LEGO Designer Mike Psiaki in 2012 when he joined the LEGO Group and from there the model evolved by including the iconic Jurassic Park gates to add additional building experience and value for „Expert“ builders.

In our desire to continue to allow LEGO Ideas members to submit product ideas based on third-party licenses, we have in the LEGO Ideas guidelines acknowledged the fact that there may occur unintentional overlaps between products being developed internally by our design teams and those submitted by fans via LEGO Ideas. This is simply because great minds think alike sometimes, especially when basing designs on popular licenses of movies, TV shows, vehicles, buildings and more, with whom we either already collaborate with or who fit the LEGO brand values for potential future collaborations.

LEGO refers here to the LEGO Ideas guidelines, which fan designers already point out to possible overlaps and above all to the fact that the T-Rex (as the heart of the set) has been “on the slagheap” for many years and has been further developed ever since.

We asked ourselves: How does the designer of the LEGO Idea design Sami Mustonen see the whole theme and how does he feel after the official set was announced? We contacted Sami without further ado and had a little interview with him about Instagram, which I would like to show here in translated form:

StoneWars:Hello Sami, thank you for taking the time to talk to us about the new Jurassic Park Set from LEGO! Did LEGO ever contact you about your Ideas design after the set was rejected?

Sami: No they didn’t, after the message I got about the rejection. Not until yesterday actually: I received email from them where among other things they opened backgrounds to the design process for the new set and clarified the origins of the T-rex model which dated actually back as far as to the year 2012. It was quite extensive story and it’s a nice act from them to contact me.

StoneWars: Did you know that LEGO would make a set with a big brick-built T-Rex and the iconic Jurassic Park Gate?

Sami: No, I wasn’t aware that they were planning to make this an official set.

StoneWars: How do you feel now that LEGO is launching the new Jurassic Park T-Rex Rampage Set? Are you mad?

Sami: No absolutely I’m not 😊 I sent them a reply where I basically said that they don’t owe me any explanations, it’s already been many years since my submission and of course they can use the ideas later how they want. Of course if this set would have released lets say in the same year my submission got denied, I could have felt another way, but its been already many years since then. Also I think it’s not even close to looking the same as my idea so I don’t have any problem with the new set. They will send me a copy of the new set wich was a very pleasant surprise for me.

StoneWars: Thank you for taking the time to answer our questions!

So you see: in contrast to what happened at the Ghostbusters House, the fan designer of the new Jurassic Park Set is absolutely not angry and doesn’t mind the official release of the set. On the contrary, Sami seems pleased with the release of the set, the news from LEGO and his free copy.

Conclusion: Is it stolen?

I have to say: For me, the story from LEGO’s statement is conclusive and the fact that the fan designer doesn’t bother with the partially similar implementation is also an extremely important point for me.

Both the implementation of a great T. Rex and the iconic goal are not uncommon in themselves. Many MOC builders have already addressed these issues. Also on LEGO Ideas platform are many different T. Rex to be found and even the gate was already submitted in different drafts. Combining both is not necessarily the most absurd idea, but it’s also not completely obvious.

One can certainly not rule out that a certain inspiration spills over from the Ideas platform to the LEGO designers. That’s normal and in the nature of things. If you don’t lock yourself in the basement without the Internet, you’ll always be inspired by things you’ve seen. And as long as things haven’t obviously been copied and the designer of the Ideas design doesn’t feel bad about it, I don’t have any problems with the possible inspiration.

So I would say from my point of view: No, not everything is stolen here. What do you mean? How do you feel about the situation after knowing the opinion of Sami Mustonen? Write your views in the comments!